A little bit of Heaven on Earth: Miserere mei, Deus (Allegri) by the Tenebrae Choir 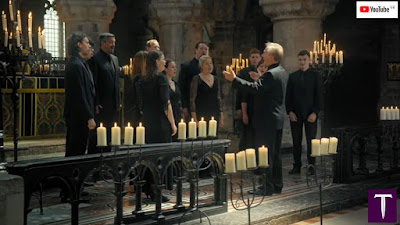 Wikipedia: Miserere (full title: Miserere mei, Deus, Latin for "Have mercy on me, O God") is a setting of Psalm 51 by Italian composer Gregorio Allegri. It was composed during the reign of Pope Urban VIII, probably during the 1630s, for the exclusive use of the Sistine Chapel during the Tenebrae services of Holy Week, and its mystique was increased by unwritten performance traditions and ornamentation. It is written for two choirs, of five and four voices respectively, singing alternately and joining to sing the ending in 9-part polyphony.

Composed around 1638, Miserere was the last and most famous of twelve falsobordone settings used at the Sistine Chapel since 1514. At some point, it became forbidden to transcribe the music and it was allowed to be performed only at those particular services at the Sistine Chapel, thus adding to the mystery surrounding it.

Three authorized copies of the work were distributed prior to 1770: to the Holy Roman Emperor, Leopold I; to the King of Portugal, John V; and to Padre (Giovanni Battista) Martini. None of them succeeded in capturing, however, the beauty of the Miserere as performed annually in the Sistine Chapel. According to the popular story (backed by family letters), fourteen-year-old Wolfgang Amadeus Mozart was visiting Rome when he first heard the piece during the Wednesday service. Later that day, he wrote it down entirely from memory, returning to the Chapel that Friday to make minor corrections. Less than three months after hearing the song and transcribing it, Mozart had gained fame for the work and was summoned to Rome by Pope Clement XIV, who showered praise on him for his feat of musical genius and awarded him the Chivalric Order of the Golden Spur on July 4, 1770. Some time during his travels, he met the British historian Charles Burney, who obtained the piece from him and took it to London, where it was published in 1771. The work was also transcribed by Felix Mendelssohn in 1831 and Franz Liszt, and various other 18th and 19th century sources survive. Since the lifting of the ban, Allegri's Miserere has become one of the most popular a cappella choral works now performed.

Performed by the Tenebrae Choir, conducted by Nigel Short