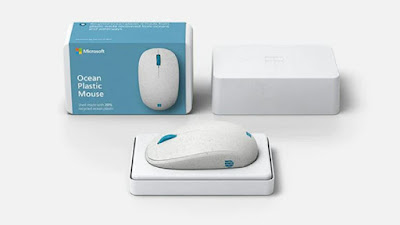 How can something as small as a mouse make a such big impact in Microsoft’s commitment to sustainability? It all starts with plastic water bottles and the desire to make positive change.

According to the National Ocean Service, scientists estimate there is more than eight million metric tons of plastic found in the ocean. By 2050, one study estimates there will be more plastic than fish in the world’s oceans. The environmental impacts are staggering. For the product and engineering teams at Microsoft, trying to figure out how to utilize this plastic waste in a new way represented a major undertaking.

The start of what eventually would lead to the development of the Microsoft Ocean Plastic Mouse, which is now available for pre-order, sprang from a series of questions asked by a dedicated group of individuals across several teams determined to crack a difficult challenge.

“The team wondered, why couldn’t we make a resin out of plastic in the ocean and make a dent there?” said Patrick Gaule, senior designer on the Windows & Devices design team. “We started formalizing this idea. What type of resin? What kind of product? We came up with a plan to look into it. We were sure it was going to be very hard. We weren’t sure it was going to work.”

Plastic resins are made by heating hydrocarbons until they are broken down into smaller molecules. Synthetic plastics contain polymers as a backbone ingredient. Polymers consist of repeating covalent bonded units known as monomer residues. These polymers have specific characteristics that are utilized in applications like water bottles, caps, packages and other everyday plastic materials. Polymer resins in pellet or bead form are then put into moulds to create products.