Malaysian police destroy 1,069 bitcoin mining rigs with a steamroller. It's a start... 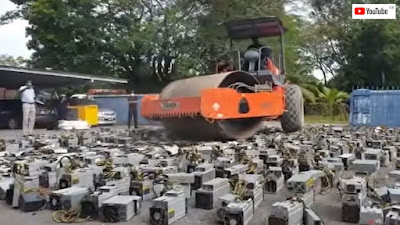 Call it a crypto crackdown - literally. Malaysian authorities seized 1,069 bitcoin mining rigs, laid them out in a parking lot at police headquarters, and used a steamroller to crush them, as part of a joint operation between law enforcement in the city of Miri and electric utility Sarawak Energy.

A video of the event posted last week by local Sarawak news outlet Dayak Daily has since gone viral on social media.

Acting on a tip, authorities on the island of Borneo confiscated the rigs in six separate raids between February and April. In total, police destroyed about $1.26 million of mining equipment.